Samson fish (Seriola hippos) are the steam trains of the ocean and, like all Seriola species, are an incredibly powerful fish that deserve the respect of all who chase them.

Seriola, being the genus in which Samson fish, Amberjack and Yellowtail Kingfish belong to, Hippos referring to their size and nature.

They are an aggressive fish that will readily take most offerings and can be generally found around most deep water, southern West Australian wrecks and reef systems. 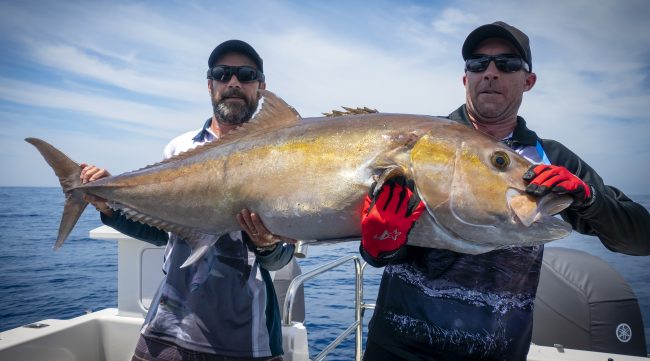 But they are not just found in WA. According to WA Fisheries:

“The Samson fish is confined to the waters off southern Australia and the northern waters of New Zealand’s North Island. They are generally more common off Western Australia than elsewhere. The species is found southward from Shark Bay in Western Australia, along the west and south coasts to the Yorke Peninsula in South Australia. On the east coast of Australia, Samson fish occur from Moreton Bay in Queensland down to Jervis Bay in New South Wales, but their abundance is patchy.”

Here’s a link to their Fact Sheet

Unfortunately, most anglers confuse the Amberjack species with the Samson fish, its closely related cousin. Hopefully, the information below will not only assist anglers in their pursuit to land a big samson, but also educate on how to determine the difference between the two once and for all. 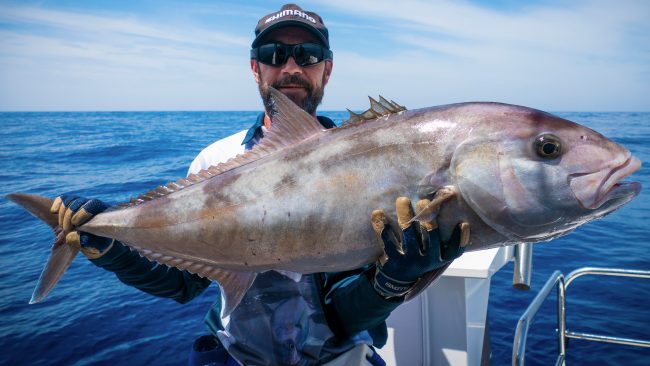 As we learned above, Samson fish are regularly encountered in WA waters from as far south as Albany right up to Shark Bay in the north. They are generally found in much shallower waters than their closely related cousins the Amberjack and can also be found throughout NSW and southern Queensland.

Samson fish hotspots include the Abrolhos Islands off Geraldton, where some fish have been tamed around the settlements and can be hand fed.

Perth’s sunken barges found out from Rottenest Island is another samson hotspot, as these fish congregate in huge numbers from November to February to spawn.

Samson fish can grow to over sixty kilos in weight but are generally encountered around the 15–20kg mark here in Australia. Anything over 40kg is considered to be outstanding.

The Western Australian state, Australian and world record is 39kg at present, it was landed by Rhyss Whittred on 8kg line out from Perth.

They start out as juveniles with brown patches on their flanks and these will often turn up on the 5 Fathom or 3 Mile Reef to bust up your small fish offerings.

They grown very fast and can reach 60cm after only two years. By four they are mature and almost a metre long. The largest fish are over 30 years old. 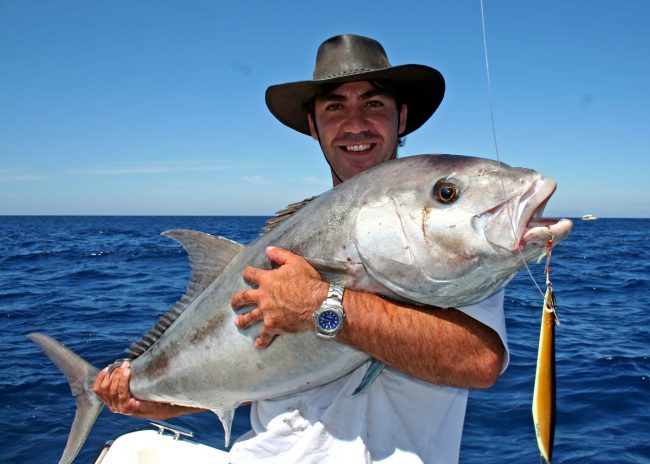 Samson fish prefer a mixture of shallow and deeper water, which offers some form of natural or man-made structure such as oil rigs, gas platforms and underwater wrecks and reef systems.

It is not uncommon to find samsons in depths as extreme as 100 or even 200 metres during spawning! The aggregation of spawning Samson fish in these deep-water locations is now considered to be one of the best jigging locations in the world and for good reason.

Enormous schools of spawning fish can be found out from Rottenest island in an area known to most anglers as The Barges; a series of deep underwater structures Samson fish and Amberjack tend to gather around from late spring through summer.

Unfortunately, large sharks have also recently taken a liking to the area, turning what was once an incredible jig fishery into a more costly and frustrating exercise than it should be.

Only seven fish were re-captured to the north of Rottnest Island. Two fish tagged at Rottnest Island, however, were recaptured in South Australia after traveling some 2,500 kilometres.

Samson fish are remarkably similar in appearance to their closely related cousins the Amberjack and Yellowtail Kingfish.

The most efficient way of determining the difference between all three is to conduct a dorsal ray count on the second or rear dorsal fin of each species:

Dorsal rays are the soft, vertical lines which run through a fish’s dorsal fin. Amberjack also have a distinctive gold band running horizontally across the body of the fish and larger scales than Samson fish.

The head shape of an Amberjack is also slightly different to that of a Samson fish.

This fish is considered more of a sport/game fish than a table species and has been known to carry a parasite that turns flesh to mush once cooked.

This generally occurs in larger specimens and it’s next to impossible to determine the difference between fish that have the parasite and those that don’t until cooking is attempted.

Smaller specimens of around 8–12kg can be eaten. Try cutting into bite sized pieces then coating in beer batter. Simply fry and enjoy with a dipping sauce of mayonnaise, hot English mustard and lemon juice.

The Samson fish is one of the hardest pulling fish around and is famous for fighting dirty! Due to its nature and power, plus the environment in which anglers are generally given to chase them in, medium to heavy tackle is required to subdue these very worthy adversaries.

Spin and overhead reels capable of handling line classes of 30–80lb are usually needed, with rods in the same category to match. Braided lines are a must for fishing deeper waters and, not only allow an angler to feel more, they also stop fish quicker due to their low stretch factors.

Multi-coloured braids that change colour every ten meters or so are ideal for determining exactly where your jig or baits are situated in the water column.

Leader materials of 80–150lb are required to help prevent chafing on rough underwater and subsurface structures.

Knife jigs from 115–400 grams in weight with some luminescence on them seem to work best as lures. 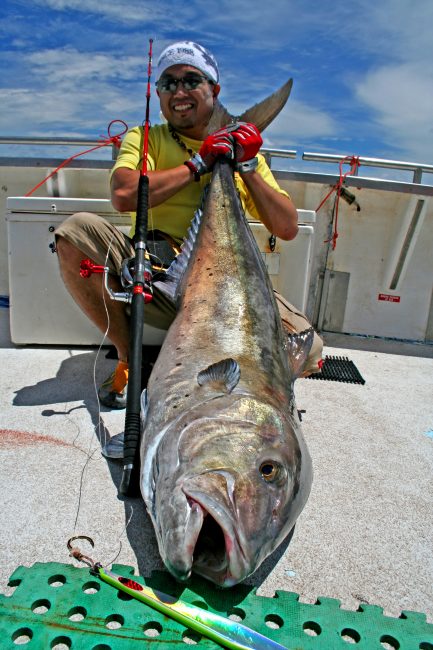 Soft plastic and sub surface lures from 5–10 inches in length are also great when the bite is slow or smaller fish school up and begin to crash bait on or near the surface.

Drop live baits or knife jigs down to the depth the fish are showing and keep your thumb or off-hand feathering the line as it comes off the spool.

This presents the lure better and you will also be able to feel any hits on the way down. When the jig hits the bottom, crank and lift quickly. On some days you may need more finesse but always start with some frantic activity.

If you’re in the right spot and you’ve read your sounder correctly, hang on!

Occasionally other fish will follow hooked specimens to the surface, dragging more friends with it. This is the perfect opportunity to try new techniques such as soft plastics and sub surface lures.

Lighter spin combos spooled with braided and gel spun lines rated to around 20–30lb are best suited for this technique but anchoring and berleying over shallow reef systems will also produce too, although stopping them around these reefy locations more often than not ends up in the fishes’ favour.

Samson fish prefer tide changes early or later in the day or evening, especially around a new moon phase but will generally feed in most circumstances.

During spawning aggregations, they may prefer heavy, metal jigs over baits. The action and speed of these metal jigs is likely to entice aggression strikes even when fish are not hungry. 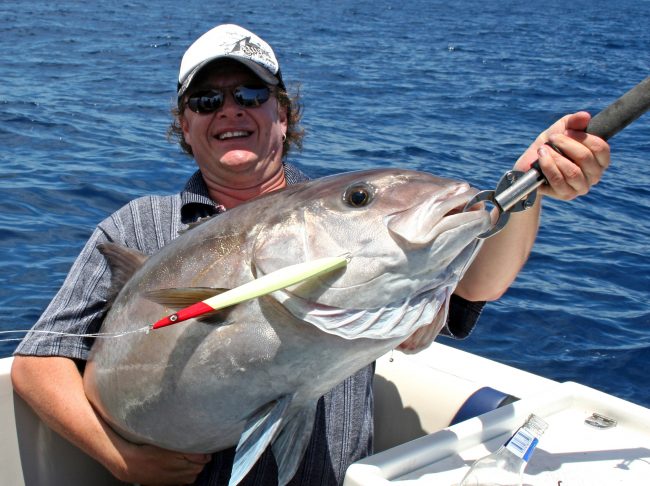