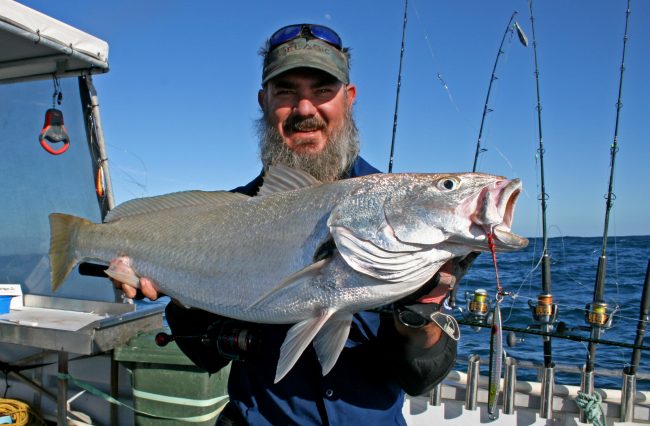 A bright, shiny piece of metal enticingly flutters and lands with an arousing clang amongst a jagged, metal,
underwater wreck.

The fish is intrigued as it slowly makes its way curiously out from the dark, quiet crevice it calls home. A prey item wriggles and shimmies seductively in the low, gloomy light and the fish moves into position ready to strike. WHAM, mulloway metal rocks!

Mulloway are a mysterious species that have eluded many dedicated anglers over the years … and for good reason! They are often heard throughout southern estuary systems as they call and croak to each other during the quiet, calm approach of night.

Big mulloway are the ultimate prize for many shore based anglers and are a large predatory fish that spend most of their lives in estuarine environments as juveniles before moving out to sea, providing anglers from all walks of life with the fantastic and unforgettable opportunity of catching that fish of a life time!

Some larger mulloway remain in these shallow systems and become residents growing to enormous sizes. These specimens are infamous for taking small offerings on lighter outfits intended for other species, leaving many seasoned anglers with limp lines and trembling hands.

There are typically two separate species of mulloway encountered throughout Western Australia; the southern mulloway (Argyrosomus japonicus) and the northern mulloway (Protonibia diacanthus) which is more commonly referred to as the black jewfish. 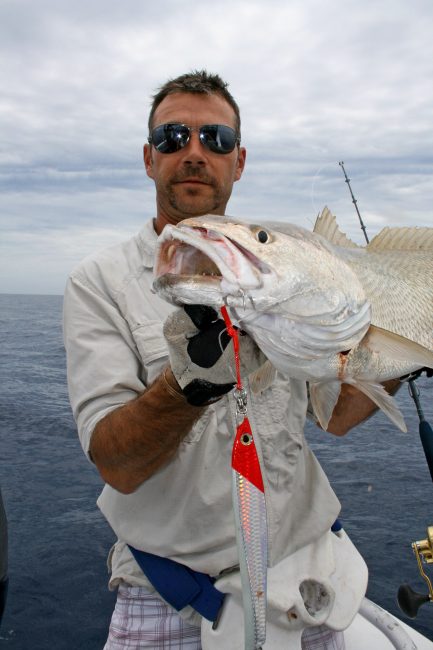 The latter often proves to be far too powerful for the light barra-styled outfits they are commonly encountered on.

Both species are considered to be good eating and great sport by the many anglers who devote so much of their time to chasing them.

Mulloway are commonly referred to as jewfish by northern and eastern anglers due to the ivory-like ear bones which are located inside the skull of the fish. These can be removed after the process of boiling the head.

Landing one of these fine specimens on rod and reel is often an arduous task that entails meticulous terminal tackle rigging, bait presentation and hours and hours of dedication for many.

Smaller mulloway are often referred to as soapies due to their mushy, soap flavoured flesh and are typically encountered by anglers fishing estuary and beach locations in search of other popular species such as bream and tailor.

Larger specimens of mulloway are also likely to be encountered in these areas, providing anglers with the thrill of a lifetime, although unfortunately most are not landed due to the poorly maintained or simply under gunned tackle being used.

Anglers that experience this horrible feeling often become immediately distraught and compulsively driven to relive the encounter with a higher rate of success. Even after the accomplishment of landing one of these fine fish is finally achieved some anglers still remain obsessed by them!

Mulloway can be encountered during most forms of saltwater fishing and by most anglers, from beach roamers and rock hoppers to bluewater boaties and riverbank regulars.

They are a typically elusive fish, due to their size, strength and fussy eating habits and are a species that provide an angler with a real sense of satisfaction when targeted and landed intentionally.

Most standard mulloway techniques combined with long hours will eventually lead to mulloway success for most dedicated anglers.

Soaking live and dead baits in rivers, beaches and rocky outcrops as well as off shoreline reef systems and man-made structures such as wharves and underwater wrecks will all produce mulloway at certain stages of the year.

The real trick being to work out where, when and, more importantly – why?

In fact, there are possibly greater numbers of mulloway present around Perth and its surrounding areas than most anglers imagine! Local haunts such as the Narrows Bridge, Fremantle Moles and wharves, as well as beaches and offshore locations like the sunken barges account for many mulloway captures for the dedicated and devoted anglers that put in the time and effort each season.

Learning and understanding a species enables anglers to become more connected to what the fish are likely to be doing in an area and helps to fine tune techniques to a much higher level.

Mulloway have also been taken with fairly regular success over the years on artificial lures such as white lead heads, hard bodied minnows, soft plastics and, of course, metal jigs.

This is especially the case in the north west where the black jewfish is often encountered whilst targeting barramundi with hard bodied lures. The humble white lead head jig has also accounted for its fair share of northern mulloway and is still to this day considered to be one of the gun lures anywhere warm.

The potential of metal jigs was brought to my attention whilst working with Whitey and Sea Sport Charters out of Jurien bay, where the real possibility of catching an enormous variety of species on metal became seriously apparent.

No matter where we went, we just kept on catching fish of all sizes and varieties but the most interesting was the mulloway. 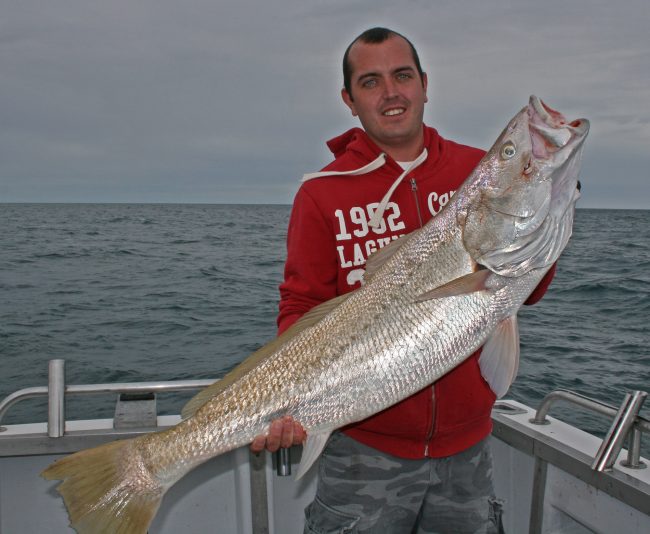 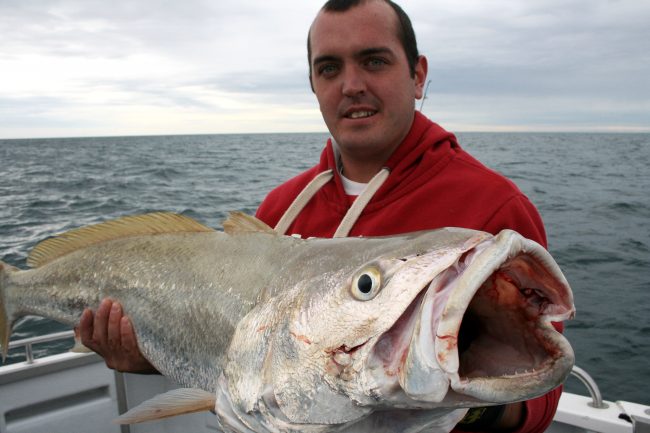 We often encountered them around wrecks and reef systems from 30-120 metres and we found that the mulloway in these areas were more than happy to take metal jigs, providing they were the right style, size and colour and, most importantly, worked in the correct manner.

This consisted of firstly using the right rod, reel and line for the job which saw us opting for light PE 2-3 spin outfits for areas of broken, shallow reef and heavier PE 4-6 outfits for deeper water or heavier structure such as sharp, metal wrecks.

Fluorocarbon leader between 40lb and 120lb were sufficient in most circumstances and it is extremely important to use a heavy enough leader to avoid bustoffs. On the other hand, it must also be supple enough to allow the jig to work to its full potential.

We also noticed that taking it easy on fish hooked amongst heavy cover seemed to relax the fish and prevent them from smashing us through the rugged bottom!

Jig choice proved to be crucial and very dependent on what the mulloway in the area were actually feeding on. A few simple jig changes to determine and match what the fish are eating were important.

For instance, squid, yellowtail or pike were matched with the closest metal jig we had and would be key to our success. Most jigs will work to a reasonable degree, but the more expensive jigs do have a much better action and finish which will in turn catch more fish in the long run.

When combined with the right jig colours, shapes and sizes that replicate the prey of your intended target species, you are close to unlocking the secret. 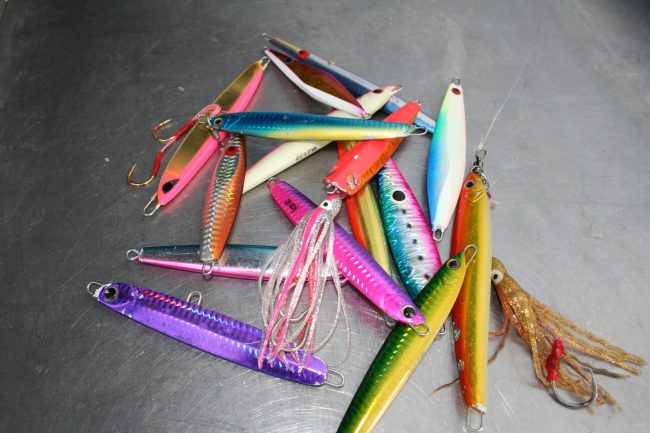 When targeting mulloway on metal specifically, the use of small, colourful plastic squid skirts attached to assist hooks also proved to be an important factor during certain stages of the season.

Taking the time to gain (and remember to diary) information about the area you are fishing and what the fish there are likely to be feeding on will save time experimenting with various colours, shapes and sizes dramatically.

The choice of outfit used is also paramount to the success of mulloway jigging outcomes, with most anglers preferring to use stiff, powerful rods and fast, high geared reels capable of working jigs fast and furiously for seriola species such as samson fish, amberjack and yellowtail kingfish.

This is certainly not the case when targeting slower moving species such as mulloway. Softer, lighter rods that enable an angler to softly work a jig with true feel and effect are much better suited for slow action jigging styles, as are reels with slower retrieve ratios.

High speed reels can be used effectively but quarter to half turns of the handle are required to prevent the jig from being ripped away from the curious fish too quickly.

Jigging styles and actions can vary tremendously, depending on an angler’s skill and co-ordination, but learning to not just match but also imitate the species of prey the fish are chasing as closely as possible is paramount!

As is the case in most lure and fly fishing scenarios, the level of success achieved will all depend on how close your offering looks to the real thing!

This includes colour, size, shape and movement; these are all things that make fishing with artificial lures both challenging and rewarding at the same time.

Sea conditions play a key role in the style of action an angler should impart on a jig. Large, slow, rolling swells should see an angler jigging with long, slow sweeps of the rod, with very little line retrieved until the jig is around 10 metres from the sea floor … before being dropped back down.

This allows the jig to remain close to the bottom and flutter around more so than being worked away from the sea floor erratically as you might do with samsons. 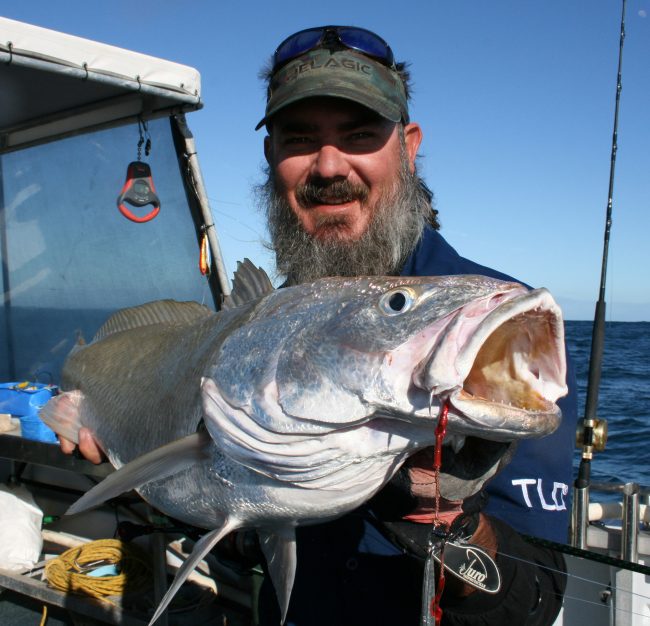 Calm sea conditions are better suited to a slow, short series of rod movements with short amounts of line being taken up by the reel until the jig is around 10 metres from the sea floor, then dropped again.

Both of these techniques are a technical jerk style of retrieve that will work well on most bottom dwelling species.

Mulloway are unfortunately a species well known for their poor condition upon capture from water depths of over 10m or more. This is generally due to barotrauma making the fish extremely difficult to release.

Any anglers wishing to intentionally target them should understand that catch and release might not be possible so be prepared to keep the fish in good condition on board before eating.

Mulloway are a mighty species of fish, no matter where or how they are encountered and deserve the respect of all who chase and therefore know them.

They are the kind of fish that can bring an angler to their knees and reduce them to tears upon defeat. They are the kings of their domain and are the prize of the inshore angling world.

The possibility of consistently targeting mulloway with metal is real, even off Perth and certainly as you head north to Jurien and beyond. However, it is also important to stress that sharks are now a problem at many Perth mulloway wrecks so if you have a fish sharked, it’s best to move on to another spot as you’ll just donate quality fish after quality fish to the taxman.

So next time you are in your local tackle store looking to scratch the jigging itch, grab some mulloway metal, you might just be pleasantly surprised at the result!